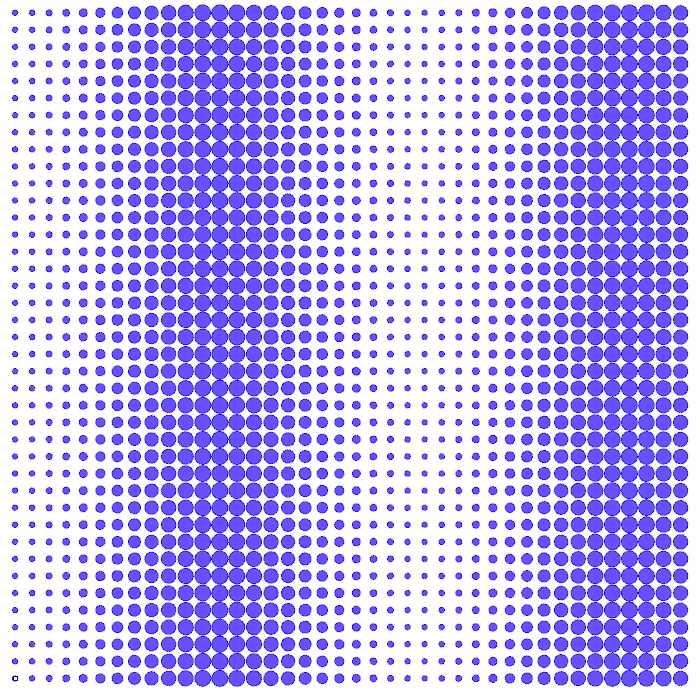 This is a simple script to introduce a tool in Grasshopper that has some uses, but which I myself haven’t used that much. It takes a graph to remap values (Hence GraphMapper) using some mathematical functions (e.g. sine curves, parabolas, etc…) While it is good for playing around, I don’t find it too useful since I’m generally not interested in expressing pure mathematical functions in design, and when I do I usually use the expression command. But it has its uses, although it can be a bit tricky to set up.

Step One – Setup a grid of points. This time I did it similarly to Example 1.3 so by changing the way you graft the X and Y points, the direction of the graph effect changes. Examples in the first row below have the points grafted in the X direction, while examples in the second row have the exact same settings but the points grafted in the Y direction. You could also do this with a rectangular grid of points and using the “Flip Matrix” component to change the orientation of the effect. Note one other thing I did, if you want to move the grid around in space, you can draw a reference point in space and use this to start the series deconstructing the X and Y values of the referenced point per the script image.

Step Three – Now to setup the graph mapper. This can be tricky sometimes, but generally it needs a Range input (not to confuse with domain or series) The range, then confusingly has a domain. In this case the Domain will be numbers between 0 and 1. Range outputs a list of numbers similar to a series, but this time the Range of numbers is evenly spaced through the domain. Another thing with range is you often need to setup an expression in the N input (N-1; right click and choose the Expression command and type in N-1) because it will give you otherwise one more number than you need, and the last series of circles will be scaled twice.

One more step, since I don’t want anything scaled by zero I remapped the range into a domain between .34 and 1.0.  On second thought, I probably could have just input this into the domain at the beginning…. sigh…

Below are a few examples of possible output. The first row are various frequencies of sine curves. The first and second row have identical graphs, but I changed the way the two X and Y series are grafted together. The last row has a perlin noise curve and some exponential curves. And here is a screenshot of the script…